From Disney’s hit film The Fox and the Hound to Dr. Seuss’s Fox in Socks, foxes are frequent popular media icons. However, while most people may know a little bit about foxes from their childhood cartoons, the truth about our local foxes make these crafty canines stand out from the pack.

Currently in the state of Michigan, there are two wild fox species, which are the red fox and the gray fox. While they’re named for their primary fur colors, both species have very high variation in their coloration, meaning that a red fox can be gray and a gray fox can be red. However, one key feature that sets them apart is that the gray fox’s tail ends in black fur while the red fox’s tail ends in a tuft of white fur. There are other less noticeable differences between the two, such as red foxes having pointier faces and being bigger than gray foxes, but the distinctive tail patch is the most obvious. Gray foxes are often described as more ‘catlike’ with their smaller, less pointed faces- and they regularly climb trees, unlike their larger red fox relatives!

Foxes are omnivores, meaning that they’re anything but picky eaters. While they prefer small rodents, they’ll gobble up a diverse diet of birds, amphibians, insects, and even fruits, berries, acorns, and other plants. In the winter, when snow cover makes finding food more difficult, fox make use of their excellent hearing to pounce upon unsuspecting rodents moving along underneath the snow! Foxes also use the Earth’s magnetic field to help hunt their prey, preferring to pounce while facing north or northeast. Much like birds or turtles, foxes can sense magnetic fields around them, and use that to their advantage. Truly, with an impressive intellect and innate ability to find north, foxes make deadly predators.

Foxes are primarily nocturnal, or active at night. If you look closely at the eyes of a fox, their vertically-oriented pupils help them see in dim light. Additionally, if you ever caught a fox walking around, you’d realize how similar its walk looks to the stride of a feline. This is because foxes walk on their toes, making them both speedy and silent, both important traits for successful night hunts. 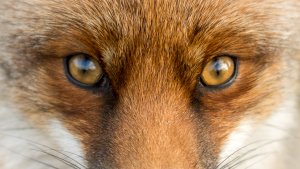 The gray fox is less likely to spend time around human habitation and has seen population declines with the reduction in its preferred habitat of woods and wetlands. Red foxes are more adaptable to human-dominated landscapes and open areas, making it the more well-known of the two species. Places such as the Metroparks continue to provide habitat and hunting grounds for both species as well as the larger eastern coyote. All three canids provide important ecosystem services in controlling rodent populations!

Foxes can be observed all year round, so keep an eye out for tracks and other sign of these elusive predators as you explore your Metroparks.