What are invasive species?

Our Great Lakes region is full of diverse and rich wildlife that are crucial to the health of Michigan wetland ecosystems. There is a wide variety of plants and animals that call Michigan wetlands their home, like numerous fish, birds, and aquatic plants. However, some non-native plants and animals have been introduced to the area and can be harmful to the Great Lakes. These non-native, or invasive species, were introduced to the region and can grow rapidly and expand.

One of the most recognizable plants seen in Michigan wetlands and marshes is the cattail. The broad-leaf cattail, or simply named common cattail, is widely found across the Great Lakes and is a sign of a high-quality habitat. However, the cattail plant can struggle to grow when competing against an invasive species like the invasive phragmites, as well as a non-native type of cattail called narrowleaf cattail.

Invasive Plants: Phragmites and Narrowleaf Cattail Phragmites, also commonly known as common reed, is an aggressive invasive wetland grass that can easily push out other native plants and animals. The plant grows up to 8-10 feet tall, and in dense groups that allow for easy seed dispersal while also potentially blocking shoreline views and access to water. Large growths can reduce native fish and wildlife populations as well as be difficult to walk through for both humans and wildlife. 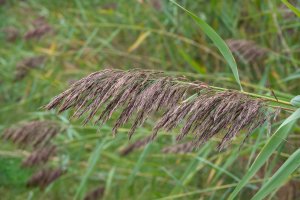 The narrowleaf cattail is an invasive type of cattail that was first recorded in Michigan in 1837. As the name suggests, this plant has leaves roughly half the width of the native broadleaf cattail. These two species of cattail are able to hybridize into a cross breed that is often more aggressive than the two parent plants. Like most other invasive plants, the narrowleaf cattail grows in dense groups that replace native plants and can reduce critical food resources for animals like birds and butterflies. 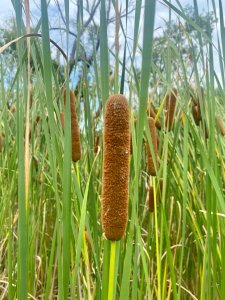 What can I do?

Managing and protecting our Great Lakes shores and wetlands is critical to keeping a healthy and enjoyable habitat for native species as well as for our own recreation. Here at the Metroparks we have our own ways of removing and controlling invasive species, but here are a few simple steps you can take whenever you are outdoors: