As you explore the aquatic areas of your Metroparks this summer, have you noticed what looks like a miniature lily-pad covering the surface of some of the lakes and ponds? Though cute at first glance, this petite plant is an invasive species called European frogbit and it is wreaking havoc throughout the Great Lakes. European frogbit looks innocent as it floats on shallow, still water among the cattails and other vegetation, with a single white-and-yellow flower and those tiny leaves. But what will we discover when we dive below the surface of this plant? 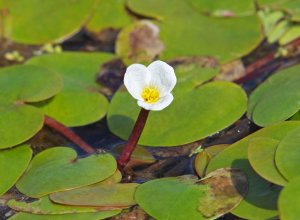 European frogbit (Hydrocharis morus-ranae) was brought to Canada from Europe in the 1930s as an ornamental aquatic plant. It escaped and found itself readily at home in the Great Lakes and connected inland waterways. Frogbit has some incredible adaptations to rapidly spread and grow. First, the plants can grow new plantlets on its long stolons. If you’ve ever experienced strawberry plants in a field, they spread in a similar way. Second, each plant can produce over 100 bead-like structures called turions. 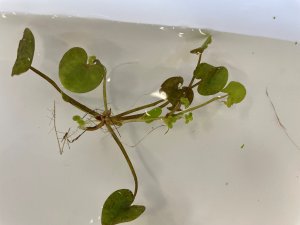 Turions drop off the plant in the fall before the cold of winter kills them and settles in the sediments at the bottom of a lake. The turions then grow into new plants when the water warms in the spring.

Frogbit does particularly well along our Lake Erie and and Lake St Clair coastlines, where it tucks itself among the cattails and phragmites, which protect the tiny floating plants from wave action. Because the plants create thick mats of leaves and blanket the water’s surface, sunlight can’t penetrate to plants beneath, reducing photosynthesis and the dissolved oxygen produced by aquatic plants. This, in turn, impacts organisms that require dissolved oxygen in the water for survival. Frogbit also impedes human travel by paddlecraft and motorboat alike. 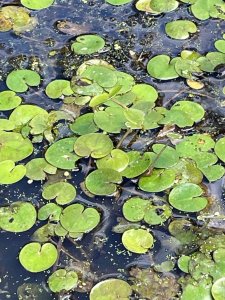 While frogbit doesn’t provide food or shelter to Michigan’s aquatic wildlife, it is an important part of the ecosystem in its native range throughout Europe- in some places there, it is considered an endangered species!

Once frogbit enters a waterway, it can be difficult to eradicate, so stopping it before it infiltrates a new place is critical. There are many ways that we can stop the spread of frogbit and other aquatic invaders: