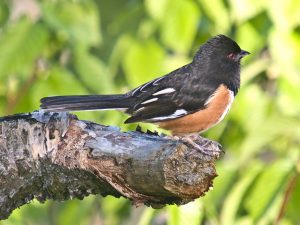 Comb through the shrubby underbrush for a peak at this bird’s rufous sides, white outer tail feathers and dark hood and back. This week’s #Bird of the Week is the Eastern Towhee! Years ago, the Eastern Towhee and the Spotted Towhee were grouped together as a single species, the Rufous-sided Towhee and that vernacular is still used in some circles today. In Michigan these birds have red eyes, but in the southeastern United States, many populations have white eyes. The Eastern Towhee can be found foraging on the ground for seeds, berries and insects by using a unique two-footed backward hop. These birds nest on the ground in low and dense shrubbery. The cup-shaped nests, built by the female are commonly parasitized by brown-headed cowbirds.