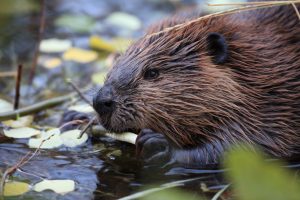 Eternally busy and particularly keen builders, beavers are second only to humans in their ability to change the landscape to suit their needs. It is worth noting, that beavers do not live in dams, they instead do double duty and build a separate structure called a lodge to call home. In addition to being excellent builders, beavers have unique adaptations that allow them to survive in their native ranges, including the ability to close their nose and ears while under water. Thick fur with an oily coating helps to keep a beaver’s skin warm and dry as they swim. Water repellency is particularly important during winter months, as beavers do not hibernate. Instead, they spend the winter living inside large, warm lodges with a food cache of sticks nearby. Beavers are herbivores and will subsist on roots, leaves, aquatic plants, and tree bark. Beavers spend the first two years of their lives with their parents and live for an average of ten years total. Their second year of life is spent helping to raise their younger siblings. The saga of beaver populations is complex. In the early 20th century beavers were nearly extinct due to over trapping. Populations have since recovered beautifully, and in fact beavers can sometimes be seen as a nuisance to those living near their habitat. It cannot be denied, however, beavers have a positive impact on the natural communities they are a part of. Beaver dams create wetlands which provide habitat, purify water, reduce flooding and erosion, and increase biodiversity. To see beavers in your Huron-Clinton Metroparks, visit Kensington, Stony Creek, and Oakwoods Metroparks.