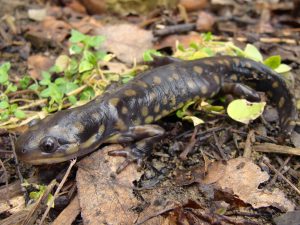 The eastern tiger salamander is one of the world’s largest terrestrial salamanders. They also have the largest range of any North American salamander and can be found all across the United States. They typically have yellow or tan markings on a black, brown or olive body, but their colors and patterns vary widely between populations. Salamander experts can often tell an individual’s geographic origin based on its color and markings.

Eastern tiger salamanders are common here in Michigan although many Michiganders will never see one due to their secretive nature. Tiger salamanders spend most of their time hidden under rocks or logs, in abandoned animal dens or burrowed in the soil where the humidity levels are high enough for these amphibians. Tiger salamanders emerge at night to feed and during spring to migrate to their breeding ponds. Adult tiger salamanders are terrestrial but return each year to the water to mate and lay their eggs. A female will usually lay 100-400 eggs, but the record for most eggs laid in a season by a single salamander is nearly 5000! Similar to frogs and toads, salamander eggs hatch into larvae that look much like tadpoles. You can easily differentiate between frog and salamander larvae. Salamanders have visible, frilly gills and grow their front legs first while frogs and toads grow their back legs first.

Join us in April at Hudson Mills Metropark for our salamander migration program for a chance to view these elusive creatures! This program runs yearly on an undetermined date. Call the activity center (734-426-8211) to register for the program and you will be contacted once the salamanders start to move!