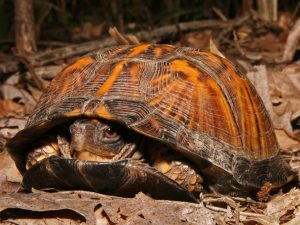 The Eastern Box Turtle, Michigan’s only true terrestrial turtle, typically lives in open woodlands, thickets, and meadows near water. The box turtle often soaks in very shallow water during the hotter summer months but avoids deep water due to its poor swimming abilities. This turtle is not a picky eater- it is known to chow down on worms, insects like crickets and beetles, mushrooms, fruits, vegetables, and other plant material. Even though the box turtle moves very slowly, it is well protected by amazing adaptations. If threatened the box turtle can “box up” (like its name implies) by pulling its head and legs inside its hard shell and has a hinge on the lower shell (plastron) that allows it to completely close its shell. The colors and patterns of the shell help this reptile camouflage well with the dappled light and leaf litter in its woodland home, which means the turtle has very few predators once it reaches adult size. You might walk right by a box turtle and never know it was there! These adaptations make this turtle one of the longest-lived reptiles in Michigan- the Eastern Box Turtle can live for over 100 years! Habitat loss and human activity are the biggest threats to this species as individuals are taken from the wild to be kept as pets. It might seem tempting to keep a box turtle as a pet, but this species of special concern is protected by Michigan DNR regulations and cannot be removed from its natural habitat or moved from place to place. You can report any wild sightings of this elusive reptile at www.miherpatlast.org. The nature centers in Lake St. Clair, Oakwoods, and Kensington Metroparks are home to Eastern Box Turtle education animals, so stop by for a visit to learn more about this fascinating reptile.