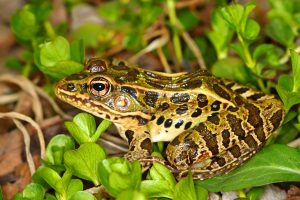 The Northern Leopard Frog is one of almost 100 frog species found in the US and Canada and is one of only 11 species of frogs found in Michigan. This medium-sized amphibian is greenish brown with dark round spots ringed with a lighter color on its back and sides and a light-colored line on the upper jaw from the nose to the shoulder. Once spring arrives throughout the northern US and southern Canada, male leopard frogs can be heard calling to females in marshes, ponds, lakes and streams. Their unique call has been described to sound like a person rubbing their hands over an inflated balloon! Females lay eggs underwater in gelatinous clusters of 3,500 to 6,000 eggs on sticks or plant material, which hatch within one to three weeks depending on the water temperature. Most tadpoles transform into inch-long froglets by July or August, though some may overwinter as tadpoles and transform the following spring. Though the tadpole mainly eats algae and decaying plant material, the adult frog is an opportunistic feeder and will eat a wide variety of insects, spiders, and worms and may travel far from water in summer in search of food.

When the warm nights of summer fade to chilly autumn mornings, the Northern Leopard Frog burrows in mud or lays on the bottom of a body of water to wait out the cold winter. This state of inactivity in amphibians is known as brumation and it allows these animals to survive until spring, when warm weather returns and food is abundant once more. Listen for this frog and other frog species during your next adventure in your Huron-Clinton Metroparks!