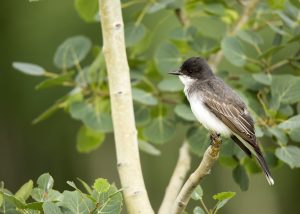 You might expect this creature with a regal name to wisely diversify its biological investments, however the Eastern Kingbird keeps all its eggs in one basket.  This “basket” is a cup-shaped nest made of weeds, twigs and grass, lined with root fibers, fine grass and fur, resting on a horizontal limb.  It takes all summer for a pair of Eastern Kingbirds to raise only one brood. By the time the parents have spent almost 2 weeks making the nest, over 2 weeks incubating the eggs, then the next 7 weeks feeding their young, even after they’ve left the nest (kind of like human parents with college students), there’s no time left to try again if something bad happens.  Because of this, adult Eastern Kingbirds do not tolerate anyone coming near the family home. When under threat, they raise their orange-red crown feathers and dive at any crow, hawk, squirrel, or other unfortunate creature that has ventured too close.

You might see the male kingbird on the lookout from a branch or tall prairie plant.  In addition to scoping out potential predators, a perched Eastern Kingbird also looks for lunch.  They hunt on wing, using their beaks to snatch large insects from the air then return to a perch where they repeatedly smash the insect against a branch to subdue and eat them. Smaller insects are swallowed whole in flight.  They supplement their diet with berries when they ripen and during fall migration. Migration happens in September, when thousands of them flock together and head to Central America.  In such a large group, you would never know that earlier in the year each family led such a solitary life.  As you explore your Metroparks, keep a lookout for these dark gray birds with white breasts and white-tipped tails swooping along roadsides or perched on tall prairie plants.