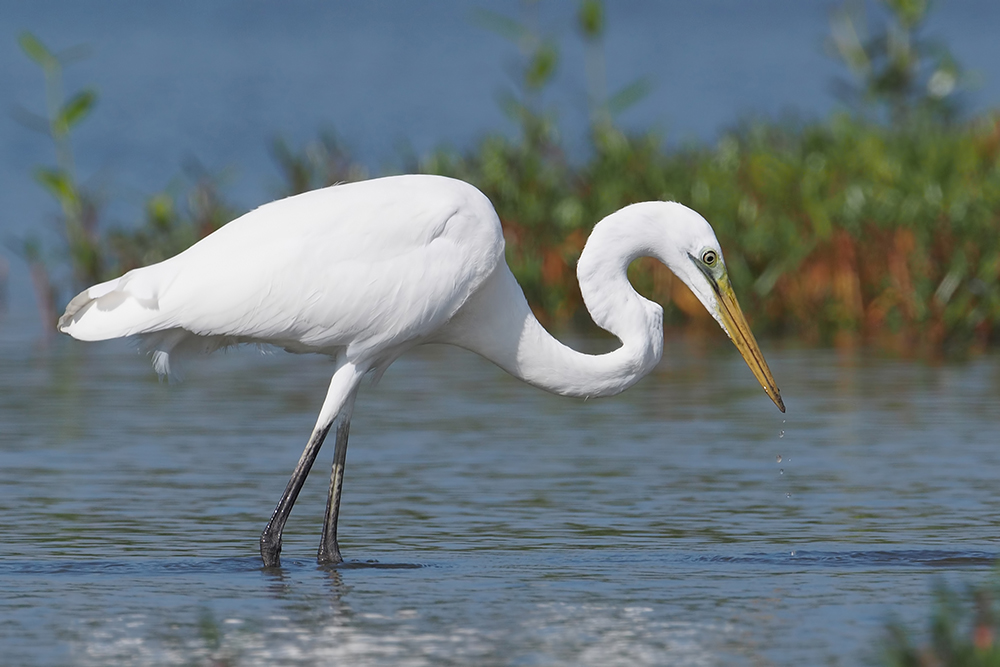 Standing just over 3 feet tall and weighing in around 1 kilogram (2.2 pounds) is this week’s Bird of the Week, the Great Egret. This long-legged bird can be seen wading slowly or standing immobile hunting for fish, frogs and other aquatic animals in lakes, ponds, and coastal marshes across much of North America. They typically nest in large groups high in the trees, referred to as a rookery, usually on islands to protect their eggs and young from mammal predators such as raccoons. The Egret has a wingspan of nearly 4.5 feet and flies at nearly 25 miles per hour with its head tucked! It can be identified by its snow-white feathers, long black legs, long neck curved like an ‘S’ and long yellow-orange bill. During the spring breeding season, a patch of skin on this bird’s face turns neon green and the Great Egret grows long plumes, called aigrettes, from its back. The Egret was nearly hunted to extinction in the late 1800s because their fancy breeding plumes were a popular decoration in ladies’ hats. The drastic decline in egret population led to the creation of the Audubon Society, jump-starting conservation movements which led to some of the first laws to protect birds in North America. The next time you visit Kensington Metropark, take a walk on the boardwalk on Wildwing Lake and look for the Great Egret and Great Blue Heron rookery on the island in the lake. Happy Birding! Click here to learn how you can help protect the amazing bird species that live in Southeast Michigan.