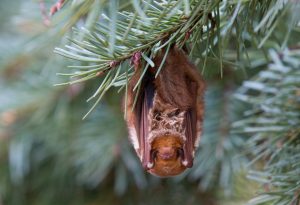 Michigan is home to 9 bat species, and none I might add are interested in drinking blood.  All are small and unassuming connoisseurs of insects. Almost all are dark colored to allow them to hunt freely in the night, finding prey by echolocation. One exception to that rule is our showy star of the day, the Eastern Red Bat. Referred to by mammologist Dr. Alan Kurta as “the most handsome mammal in the Great Lakes region”, the Eastern Red Bat is certainly the brightest colored of our Michigan bats. Their yellow to red-brown fur helps them resemble a dried leaf clinging to a tree branch in the wind.  While changing autumn leaves may provide excellent hiding spaces for Red Bats, they also signify the last days before a long trip for this migrating species.  While some details of bat migration are still being studied by bat scientists, called chiropterologists, we know they often follow the same routes as birds; they just don’t necessarily go as far as birds. To survive winter in colder migratory regions, Red Bats have thick, dense fur including on their ears and tail and will spend the colder months in hibernation. To see a Red Bat in the wild, look to the skies from April to October and check out special devices called bat detectors that allow you to hear a bat’s echolocation call. Some devices can even tell you what species of bat you are hearing!