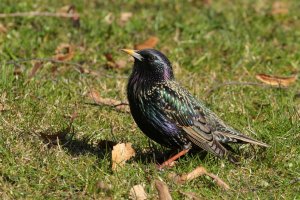 Had Edgar Allen Poe lived in Europe his famous poem, “The Raven”, might have been “The Starling.” The European Starling is a destructive pest. They are harmful to native species of birds, harmful to crops and livestock, and were even implicated in a plane crash in 1960 that killed 62 people!
European Starlings were introduced to North America in the 1890’s by a group that wanted all the birds mentioned by Shakespeare to be present in New York’s Central Park. From 60 birds released (some accounts say 60 pairs) we now have 200 million! They were first recorded in southeast Michigan in 1924.
Starlings are secondary hole nesters- they use old woodpecker holes or evict the current resident. This is harmful to other cavity nesters like Bluebirds, Flickers, and Red-headed woodpeckers. Even the larger Wood Ducks are prevented from using nest boxes, as Starlings would claim the boxes first. Starling young fledge just as cherries ripen. Some orchards in Canada report 100% crop losses to flocks of Starlings. The mere presence of large Starling flocks reduces milk output up to 7 lbs. per cow, per day. They also remove the best food from the food troughs.
But even the European Starling has some neat adaptations and endearing qualities. Starlings can open their beaks under pressure, that is, they can stick their beaks in frozen ground or packed hay and open it to grab seeds or insects that would be out of reach to other birds. Also, their eyes are located further forward on their head compared to other songbirds, which gives them good depth perception when catching insects.
Perhaps the most interesting thing Starlings do is mimic the sounds they hear around them. They will imitate other birds and animals. At a warehouse in Romulus Starlings mimic forklift back-up alarms and firetruck sirens from the station across the street. The best place to find this bird in southeast Michigan is urban and suburban areas. To experience some of our native bird species, come visit your Metroparks.