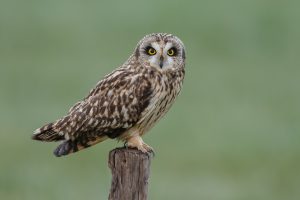 Most Michigan owls can be found hidden among the trees in our forests, but this week’s feature, the Short-eared Owl, prefers wide-open spaces. Grasslands and wet meadows are the habitat of choice for this short, round owl.  Look out for their amber eyes set into dark sockets, buff colored streaks, and crescent shaped markings on the underside of their wings. Short-eared Owls are usually quiet birds, but their call is very distinct when they decide to use it. It is often referred to as a “bark” but is not dissimilar to a startled cat. Short-eared Owls are crepuscular hunters, which means they are most active at dawn and dusk. They are even known to fly during daylight hours, particularly during the breeding season. As a species, Short-eared Owls are very widespread, calling home to every continent but Australia and Antarctica. That does not mean they are plentiful though. Due to habitat loss and other pressures, their numbers are dropping.  In Michigan they are listed as a state endangered species, so the protection of open grasslands is important to their survival. For your best chance to see these birds, keep your eyes low and watch for their moth-like wingbeats in the early evening or morning. Happy Birding!