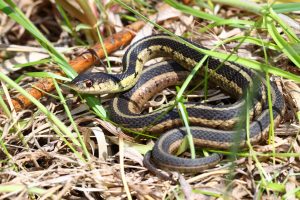 The Eastern Garter Snake is on average 18 – 26 inches long and an identifying feature is its head. The head will be wider than the neck on the Eastern Garter Snake. Down the length of the body of a Garter Snake there will be three light colored lines. The lines along the body can be yellow, white, green, or brown. One line goes down the back and then one line on either side of the body. The body can be brown, black or olive-green. The belly is usually the same color of the stripes going down it’s back and sides.