The Other Turkey, Turkey Tail Fungus 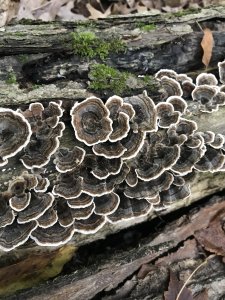 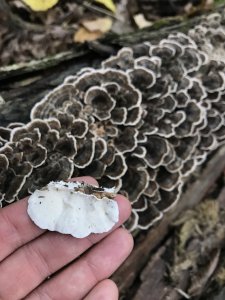 Since this mushroom shares a name with something else that might be on our minds in the month of November, it’s worth looking at what it has in common with its namesake. The Turkey Tail Fungus gets its name from, you guessed it, the tail of the wild turkey. This is due to the concentric rings of color that are found on the mushroom’s fan-shaped cap and their similarity in color and form to the adult male turkey’s tail when it’s on display. That’s where the similarities end if you’re a decent enough cook since the Turkey Tail mushroom is not considered edible due to its tough, leathery texture.

It is not unusual to encounter differences in coloration when you find this mushroom, there is a lot of variability. Sometimes the mushroom will be brown, gray, and blue, and at other times you will see auburn, copper, or greenish tones. No matter the color, they always surprise you with the colors they display. In addition to beautiful, subtle colors the cap has areas that look almost like velvet or suede with a fuzzy feel. This mushroom also grows in various forms from shelf-like clusters to rosette patterns.

The underside of this mushroom is bright white when fresh and is covered with small pores from which the mushroom releases its reproductive spores. These pores are so small that they may only be visible with a hand lens. The pores on the mushroom’s underside coupled with its shelf-like cluster growth pattern classify this fungus as a polypore. It can be found fruiting mid-summer through mid-winter on standing dead hardwood trees and fallen logs where it carries out its role as a decomposer of wood.

Although considered inedible due to its tough texture, Turkey Tail has potential benefits for the human body. People commonly make teas and tinctures with this mushroom and an extract from Turkey Tail has been used to boost the immune system of people undergoing cancer treatments in China and Europe. The Turkey Tail fungus is one of the most common fungi and it is found on every continent except Antarctica.

The Latin name for Turkey Tail, Trametes versicolor, translates to one who is thin of various colors, and if you can remember those clues, you’re well on your way to recognizing this mushroom in the wild!

If you are interested in learning more about mushrooms in Michigan there are some great resources out there. Check out a Mushroom Club program at Lake Erie Metropark led by a staff interpreter and Certified Mushroom Identification Expert.

The North American Mycological Association is a great all-around resource for fungi: https://namyco.org/