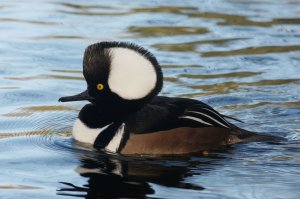 If Michigan were to ever select a state waterfowl, the Hooded Merganser would be an excellent candidate. Although this elegant bird can be found across most of the United States and southern Canada, the largest population numbers are centered within the Great Lakes region. And the adult male is nothing short of breathtaking with his crisp black and white stripes, rich chestnut sides, and what looks like a slicked back hairdo. If you’re lucky, you’ll see a male showing off his namesake hood, when those long drooping feathers at the back of his head unfurl into a brilliant white semicircular crest that completes the dashing look. Females at first glance resemble an all-brown version of the male, but upon closer inspection sport a dash of cinnamon in their long head feathers.

Just like Michigan’s other two merganser species, these diving ducks are perfectly adapted for chasing down aquatic prey, with a thin serrated bill for holding onto slippery fish and a clear eyelid that functions like built-in swim goggles. At around a foot and a half in length, Hooded Mergansers are diminutive by waterfowl standards and frequent small inland ponds and rivers that their larger relatives often avoid.  During the summer look for them in forested wetlands where they nest in old woodpecker holes, natural tree cavities, and occasionally unclaimed Wood Duck boxes. An individual female can lay up to 13 eggs, but Hooded Mergansers quite literally don’t put all their eggs in one basket, sneaking into neighboring nests to deposit the rest of their clutch. Nests have been found with up to 44 eggs in them from several different females and possibly even several other species of equally opportunistic ducks!

During the colder months Hooded Mergansers move to larger water bodies that stay ice-free through the long winter. This is the easiest time of year to find these otherwise well-hidden birds, so bundle up and head to one of your local Metroparks or to one of Michigan’s many other inland lakes and rivers if you would like to get a firsthand look at this small but flamboyant merganser.