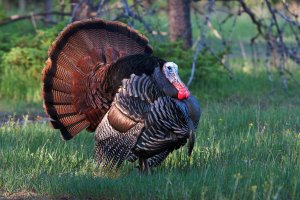 While you’re gobbling down your Thanksgiving dinner here are some facts about the Wild Turkey to amaze your dinner guests! Turkeys make a variety of sounds, but only the males, called Toms, make the distinctive gobbling sound. Tom turkeys also have more warts on their heads than their lady friends, called hens. Hens also weigh about half as much as their male counterparts. Not only do turkeys have beautiful feathers, but they also have a lot of them; an adult turkey can have from 5,000 to 6,000 individual feathers on their body.

Here’s some food for thought. The national bird of America could have been the turkey instead of the eagle. One of our country’s founding fathers, Ben Franklin wrote, “For my own part I wish the bald eagle had not been chosen as the representative of our country.” Franklin argued that the eagle was “a bird of bad moral character” that “does not get his living honestly” because it steals food from the fishing hawk and is “too lazy to fish for himself.” In contrast, Franklin called the turkey “a much more respectable bird” and “a true original native of America.” While he considered the eagle “a rank coward,” Franklin believed the turkey to be “a bird of courage” that “would not hesitate to attack a grenadier of the British Guards who should presume to invade his farm yard with a red coat on.”