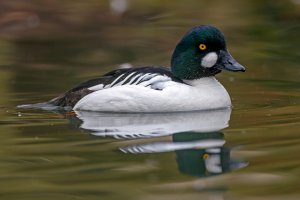 Winter is on its way and so is the Common Goldeneye.  These diving ducks spend their summers on the lakes and rivers of the taiga across the northern reaches of North America, Scotland, Scandinavia, the Baltic States, and Russia.  Common Goldeneyes are sexually dimorphic, meaning that male and female individuals can be differentiated by their appearance.  In the case of the Goldeneye, both adults will have golden-yellow eyes, but males have a darker head, a rounded white patch in the space between their eye and bill, and a bright white neck.  Females have dark brown feathers covering their heads, lack the white spot on their face, and their necks are gray.

Winter is courting season for many waterfowl, including Goldeneyes, and during this time monogamous pairs are formed.  Both male and female adults will perform courtship displays, the most vivid of which is called the ‘head-forward’ move; where they tuck their head and neck back and then swing it forward quickly.  The male will remain with his mate until later in Spring when she begins incubating eggs.

Like our resident Wood Ducks, Common Goldeneyes depend on standing trees with cavities for safe places to raise their young on the breeding grounds.  Mature pairs will often return to the same nesting cavity year after year.  When nest cavities are in short supply, expectant mothers have been known to deposit their eggs in other females’ nests!

What’s your record for holding your breath under water?  Goldeneyes can stay under water for up to 55 seconds while searching for food.  Their prey items are often fish or crustaceans, but you can also find them enjoying a meal of aquatic invertebrates, plant seeds, and mollusks.  If you see a Common Goldeneye suddenly disappear into the water, keep watching; they often return to the surface nearby after diving.  As temperatures drop and the waters of their breeding grounds freeze, Goldeneyes fly south and are often found in small flocks synchronizing dives to catch prey.

As our climate warms, the future of the Common Goldeneye in our state is uncertain.  Scientists are using computer modeling to better predict habitat losses and threats related to climate change for the wildlife we share space with.  Researchers with Audubon predict that breeding grounds in the Northern Lower Peninsula and the Upper Peninsula will not be able to support this species in the future as it faces warming temperatures that threaten delicate young in their nests, and cause increasing wildfires that devastate habitats.