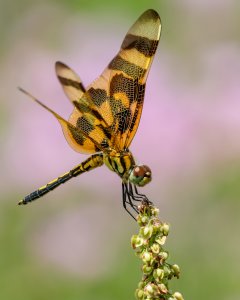 As you take a stroll around the pond you notice what looks like a colorful butterfly fluttering by, or perhaps a tiny jack-o-lantern…or maybe it was just the Halloween Pennant Dragonfly. Pennant dragonflies are named for their habit of perching on the tops of grasses where their colorful wings move in a breeze, just like a flag or pennant! The Halloween Pennant’s bright orange-and-black-banded wings resemble a festive Halloween decoration. They are found throughout the southeastern US and are a common pennant species in the Insect Order Odonata.

The lifecycle of dragonflies is an interesting one that can span many years. After adult males successfully entice a female dragonfly with their intricate flight patterns, mating soon follows. The female dragonfly deposits her eggs on dead vegetation in a body of water that is mostly stagnant.

From the eggs emerge the larval dragonfly form called a nymph or naiad. These nymphs can spend several years in this stage, as an aquatic insect. They hunt and feed on prey such as insect larva, fish, and tadpoles. Nymphs capture their prey by lying in wait, then extending their mouthparts quickly to capture any animal small enough to fit into their jaws.

Once enough time has passed, an emergence is triggered within the nymphs where they leave their watery home and head to higher grounds. They climb out of the water and cling to rocks, logs, and vegetation where they shed their larval shell and emerge a flying adult dragonfly. The discarded larval shell is called an exuviae and can be found stuck in its place, a dried husk left behind when the adult insect emerged.

As an adult, the Halloween Pennant hunts and feeds in flight, reaching speeds of up to 30 mph! They typically will prey on species of mosquitoes, flies, and gnats. Adult males of this species differ from other dragonflies which are typically quite territorial. Halloween Pennant males are often spotted in groups of 10-15 dragonflies, perched on aquatic vegetation in search of a female. Adults typically only live for a few weeks.

The Halloween Pennant Dragonfly is a welcome summer resident as they are a great source for natural pest control, especially when it comes to pesky mosquitoes and other small biting insects. While the adults may be gone for the year, we can celebrate this amazing creature all throughout the spooky season as their young hunker down under the water to await their own time of emergence.