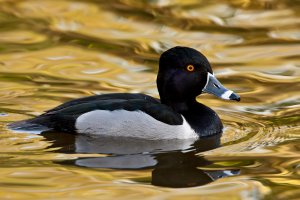 This bird’s common name Ring-necked Duck refers to a hard-to-see chestnut collar on its black neck. It’s not a good field mark to use for identifying the bird, so don’t go looking for this ring around its neck. Look instead for the bird’s peaked head shape, white ring around the bill, and white patch just in front of the gray flanks. At distance, look for this species’ distinctive males with sharp markings of black, gray, and white with a prominent white ring on the bill. Females are a rich brown with a contrastingly pale cheek, a white patch near the bill, and a whitish eye-ring. Even though this species dives for its food, you can find it in shallow wetlands such as beaver swamps, ponds, and bays where they feed on submerged plants and aquatic invertebrates. Of all the diving duck species, the Ring-necked Duck is most likely to drop into small ponds during migration. During fall migration, Ring-necked Ducks can form immense flocks. Plant foods become much more important in the diet during fall migration including leaves, stems, seeds, pondweed, water lilies, wild celery, millet, sedges, arrowhead, and wild rice. In fact, several hundred thousand congregate each fall on certain lakes in Minnesota to feed on wild rice. They breed mainly across far northern North America in freshwater marshes, bogs, and other shallow, often acidic wetlands. Protein-rich animal food is important during the breeding season, when adults are raising their young. Adult females eat almost entirely animal food during the time they’re feeding young including mollusks, snails, caddisflies, dragonfly nymphs, midges, earthworms, and leeches. Look for them during migration and in winter, when they can form large flocks that are easier to spot.