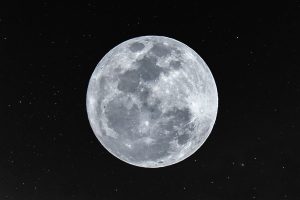 It was late in the day July 20, 1969, and a little eight-year-old boy was sitting on his living room floor, eagerly waiting for astronauts to land on the moon. Apollo 11, NASA’s mission to land the first person on the moon had just launched on July 16. That little boy was absolutely fascinated with all things space. He had models of all the NASA spacecraft in his room. He could tell you which astronaut flew on which mission. In a prominent spot on his bedroom wall was a framed portrait of the Apollo 11 astronauts: Neil Armstrong, Buzz Aldrin and Michael Collins. Granted it was in a plastic frame and the picture only cost a dollar at the drug store, but it was a treasure to him.

Apollo 11 was the culmination for the United States of the “space race” that began when the U.S.S.R. launched the Sputnik satellite in 1957. The United States, not to be outdone, started its own space program by establishing the National Aeronautics and Space Administration in 1958. Landing on the moon became a challenge that President John F. Kennedy put forth in 1962, with a deadline of “by the end of the decade”; July 20, 1969 was cutting it pretty close.

Apollo 11 wasn’t just a big deal for that little boy interested in space exploration, people all over the world took time out of their lives to watch. A reported one million people traveled to Cape Kennedy in Florida to watch Apollo 11 lift off. 600 million people, one-fifth of the world’s population at that time, tuned in to watch the Apollo 11 moon walk live. It was as though the whole world paused together to hear Neil Armstrong’s immortal words “That’s one small step for man, one giant leap for mankind.”

By our standards today, the picture quality of that broadcast wasn’t great, but that little boy got to stay up way past his bedtime to watch. You can watch the entire moon walk here, exactly the way it looked to all those people watching on television 50 years ago.

On July 20, 2019, the Metroparks will be celebrating the wonder of the Apollo 11 moon landing with a series of activities at the Hudson Mills Metropark Activity Center. You can learn more about this celebration at www.metroparks.com. The Metroparks event is also one of the 50th anniversary commemorative events listed on this NASA website and, that eight-year-old boy would be thrilled to see his contribution to this piece of history on the NASA website. I know I am.