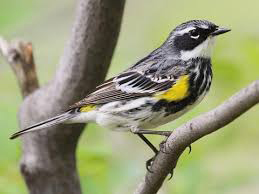 For birders in southeast Michigan, the beginning of May is an exciting time of the year as it’s the start of the great spring warbler migration in North America. 54 species are found throughout the continent, 35 of which have been spotted in one of your 13 Metroparks. One of the most common and widespread warbler species in the United States is the Yellow-rumped Warbler, which migrates in hoards twice a year. Often referred to as the “Butterbutt Warbler” due to the yellow feathers on its rump, this bird also has a bright yellow patch on the top of its head and the male wears a black mask. It is one of the first warblers to start its spring migration from Mexico and Central America in late April and one of the last warblers to leave in the fall, often staying into October. This cunning bird is one of the most versatile foragers as it primarily feeds on insects in the summer and quickly shifts to eating berries in the fall. It is this shift in diet that allows the Yellow-rumped Warbler to winter further north and migrate later in the fall when other warbler species must migrate south in search of insects to eat.

Though this warbler breeds and nests in mature forests near lakes, rivers and streams, it can be seen in your backyard if food and tree cover is available. Want to attract this bird to your feeder? Try offering sunflower seeds, raisins, suet or peanut butter and you could see Yellow-rumped Warblers all summer! Interested in learning more about warblers? Download the free Merlin Bird ID app on your smartphone or check out www.audubon.org.