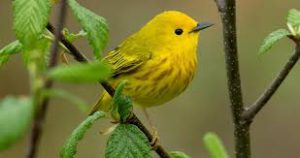 One of the most common warblers in North America, the conspicuously bright Yellow Warbler begins its northward spring migration during the first weeks of April, which is earlier that most other warblers. Like many of the over 50 warbler species found in North America, the Yellow Warbler overwinters in South America and is known to fly nearly 800 miles across the Gulf of Mexico in a single nonstop journey. These small bright yellow birds begin nesting in wooded areas near rivers, streams, marshes, lakes and ponds throughout Michigan in the beginning of May. Males have rusty streaks on their breast and can be seen perched near the tops of bushes or trees singing their “Sweet-sweet-I’m-so-sweet” song to surrounding females. These birds eat mostly insects like caterpillars, beetles and wasps, so this warbler is unlikely to show up at your backyard birdfeeder.

While the Yellow Warbler can be seen until it begins its fall migration in August, for many warblers southeast Michigan is only a brief stopover during a much longer spring migration to their northern breeding grounds. These birds stop to refuel on the abundant supply of insects in our area. For a chance to view this amazing species and many other migratory warbler species, bring your binoculars to one of your 13 Metroparks during the first two weeks of May. If you have a smartphone, consider downloading the free Merlin Bird ID app to try your hand at spring warbler identification. Www.allaboutbirds.org and www.ebird.org are also great resources to learn about native bird species. Happy birding!