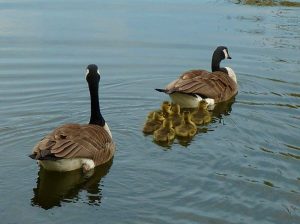 When I think of Mothers’ Day, I’ll admit that Canada geese aren’t the first thing that pops to mind. Around my house they’re affectionately known as “the Poopers.” As in, when you spot Canada geese in the yard, you call out, “Hey, look, the Poopers are in the yard!” Later on, when you’re running across the same yard to grab a frisbee during an early spring game, you might exclaim, “Aw, man!!! I just stepped in something left by the Poopers!” And then, when you’re taking the dog out with your daughter, it’s “Watch out! Don’t take him over there! That’s where the Poopers went!” Since there’s nothing our mini-schnauzer puppy loves more than to gobble down goose turds, which leads to an upset tummy and the possibility of a 5am upchucking that’s not fun for anyone. 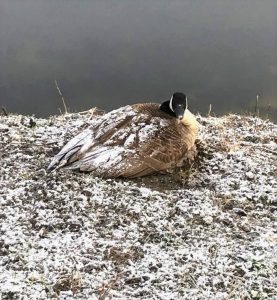 But when I spot a female Canada goose at the edge of a pond, huddled down low over a clutch of eggs in her ground nest, the sudden late-April snow from last night still clinging to her feathers, I think of Mothers’ Day. I think of how far Canada geese moms, and moms across the bird world, will go to protect their children and their eggs. Most of us have seen or heard of the distraction display of a killdeer mom, how this ground-nesting plover will feign a broken wing to lure a hungry dog or fox (or little kid!) away from her nest, putting her own heart-pounding self at risk to save her eggs. And the goldfinch moms who weave nests so tight that they’ll hold water, but who then must serve as living umbrellas to keep the rain from filling these nests and drowning their young or flooding out their eggs. And the bird moms of many different species who either eat, or later just carry away in their beaks, the fecal sacs of their young. And by fecal sacs, I mean baby bird poops and pees wrapped in a convenient mucous casing. As a modern dad I’ve changed my fair share of diapers, but never with my mouth. And when it comes to bird poop, personally I’d rather step on the stuff while playing frisbee, but that’s how far these bird moms will go to take care of their little ones.

Don’t get me wrong — being a human mom isn’t easy, either. If you have children of your own, you don’t need me to tell you about the hard work and sacrifice that comes with being a parent. Throw in closed schools and a little global health crisis and it only becomes that much crazier. With that being said, I sincerely hope you don’t have to worry about keeping food on the table and a roof over your head for you and your children. Unfortunately, I know many people do have these worries right now. I also know that Canada geese moms, and bird moms in general, live with these worries every day, even in the best of times. If it’s not the snow, it’s the coyotes or raccoons or neighborhood dogs who might raid the nest and gobble down those precious eggs some night. So here’s a Mothers’ Day salute to all the avian moms out there. May the weather be kind, may the predators be slow, and may your babies survive, even if you’re one of the Poopers. 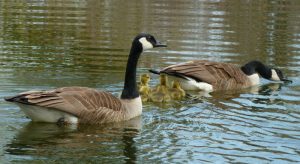