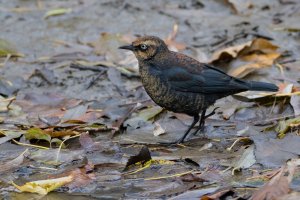 Typically seen in Michigan during their spring and fall migration – January through March, October and November – the Rusty Blackbird is a winter resident of the eastern United States. This blackbird can be found in the boreal forests of Canada, northeastern US, and portions of the Upper Peninsula during breeding season. It’s not surprising that the Rusty Blackbird is named for the rusty color of its feather tips in winter, though this color wears off on males, revealing smooth black plumage by spring. Females are a rusty brown color with dark feathers around pale yellow eyes year-round. This species feeds mostly on insects and plant material during the warmer months and survives on pine seeds, acorns, fruit, and occasionally other birds on its wintering grounds. Rusty Blackbirds will often perch in the tops of trees and can be seen foraging in a mixed flock of European Starlings, Common Grackles, and Red-winged Blackbirds. Search wet habitats such as swamps, marshes, flooded woods, and pond edges for a chance to see this uncommon avian resident.

Though it was once a common sight throughout Canada and the eastern US, the Rusty Blackbird has unfortunately experienced one of the most dramatic population declines of any songbird in North America. Over the last 40 years, approximately 89% of the population has disappeared! Researchers believe this decline is linked to loss of important wet woodlands due to logging and conversion of habitat to agricultural land. Another possibility is the historic over hunting of beaver, which led to a reduction of beaver ponds in which the blackbird lived. Only time will tell if the current rise in beaver population will restore any of the lost blackbird population. To see the Rusty Blackbird in action and hear its unique sounds, visit: https://www.youtube.com/watch?v=-YTJNy97CvE. Happy Birding!