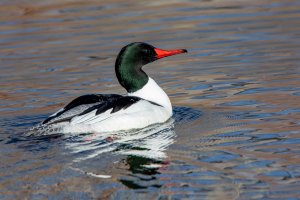 If you hope to spot a Common Merganser, look for a large duck with a long body and a red, narrow bill. Breeding males have a dark, iridescent-green head, black back, and a mostly white body. Females and immature males have a gray body, contrasting with a cinnamon-red head and white throat. The females have a shaggy crest on their head. Common Mergansers feed mostly on fish, diving underwater to catch them. They have a nickname of “Sawbill,” descriptive of their long, thin bill with serrated edges, which help them catch and hold onto their prey. These ducks spend the breeding season in forested habitats near freshwater lakes and rivers. They nest in cavities of large trees, so they are often found in mature forests. In the winter, they often form large flocks on lakes and rivers. To learn more about Common Mergansers, visit https://www.allaboutbirds.org/guide/Common_Merganser/id.