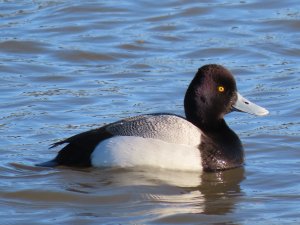 This medium-sized diving duck is the most plentiful diving duck in North America. The Lesser Scaup has a striking appearance with the male’s yellow eyes, blueish bill, and black and white feathers. When up close the black feathers on the male’s head are a beautiful iridescent purple and green. The female has brown coloring with a deep brown head, white feathers close to the bill, and a deep golden eye.  As a diving duck they dive under the water to eat aquatic invertebrates and plants. They stick their bills in the mud and swim while quickly opening and closing their mouth while letting the mud out and keeping the insect in. In the warmer months spot them in the wetlands in our Metroparks. The female nests on the ground in sedges and cattails surrounded by tall vegetation to conceal the nest. Uniquely, females start laying eggs before the nest is complete and continue to build the nest while she is laying eggs. When looking for this duck in the open waters of the Metroparks, look for large groups of waterfowl. The Lesser Scaup is a very social duck that often flocks with other diving ducks like Canvasbacks, Redheads, Greater Scaups, and Ring-necked ducks. For a beginning birder it can be hard to identify the differences between the Lesser Scaup and the look-alike species, the Greater Scaup. The easiest difference to spot is the Lesser Scaup has a flat back of the head with a small peak at the top while the Greater Scaup has a rounded head. This small difference can typically only be seen by an experienced birder with a spotting scope so don’t get discouraged when you can’t spot the difference during your bird watching. Happy Birding!