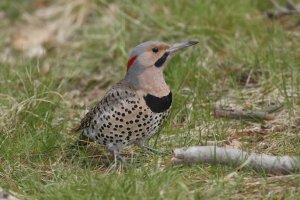 Despite not sharing the mostly black and white color scheme of its close relatives or having the word “woodpecker” in its name, the Northern Flicker does indeed belong to this group of birds. In fact, the flicker is the most widespread woodpecker in North America, found throughout all of the lower 48 U.S. states and north through Canada to the edge of the tundra. This bird can be easily identified in flight thanks to its white rump patch and brightly colored undersides of its wings. This wing coloration varies by location, with two distinct forms in the U.S. that were once considered separate species. Flickers out west have red wing feathers while birds in the east (including Michigan) have yellow feathers, with hybrids common where the two overlap. The Northern Flicker is a very vocal bird, using a loud rattle sometimes described as resembling laughter to stake out territory in the spring. They also have a distinctive “kyeer” call given throughout the year, as well as a quieter but repetitive “woika” sound used for communication between nearby birds. Northern Flickers can forage like a typical woodpecker by hammering on the side of a tree, but their preferred feeding method is much more unique. They are often found using their large bill to dig into the ground for their favorite food, ants. Across their wide range, flickers are commonly found in backyards, parks, and anywhere else that has open ground for feeding with nearby trees. Keep an eye out for this incredible bird near the edges of your yard or come find one at any of your local Metroparks!