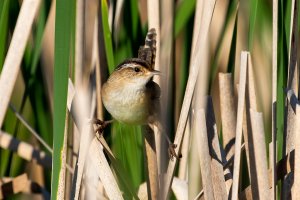 A hidden voice of the marsh, this diminutive but feisty ball of feathers is more often heard than seen. The boisterous males sing incessantly, often spending up to twenty minutes blurting out their loud and chaotic mixture of buzzes and burbles every few moments. On occasion, they even sing on and off all night long. But that’s not the only thing that keeps male Marsh Wrens busy in early spring. They also migrate back to Michigan a few days to weeks earlier than the females to give themselves time for frantic nest building. A male Marsh Wren will typically build at least six nests per female on his territory, with one record-setting individual building 22 in a single season! Once the female arrives, she will carefully select her favorite from the various nest options and line the inside with softer materials, although occasionally she will reject all the hastily constructed nests and start building from scratch in a new location.

During spring and summer, look and listen for these secretive birds hidden deep within cattails, reeds, and other emergent vegetation in a variety of wetland habitats. These acrobats are experts at moving and hunting through the thick plant matter. If you’re patient and lucky one will occasionally pop up into view, often precariously balanced between two plant stems. Like other wrens, they can be separated from other kinds of birds by their rounded shape, thin and slightly decurved bill, and short tail stiffly held up perpendicular to the body. The Marsh Wren’s rusty back feathers decorated with black and white speckling along with a crisp white eyebrow further separate it from its close relatives. To learn this bird’s distinctive sounds, head over to https://www.allaboutbirds.org/guide/Marsh_Wren/sounds to take a listen. Armed with that knowledge, you’ll be able to confidently identify this little songster the next time you take a walk past a Michigan wetland, including at many of your local Metroparks!