It’s a crisp fall day in Michigan and you find yourself walking along a forested trail. Something in your periphery catches your eye. It’s bright, orange, and round. Your brain tries to assign a label to what you’re seeing…is it a ball? But why would a ball be in the middle of the woods? Is it a pumpkin? Not likely, unless someone acted on a bad idea. What could it be? You feel yourself give in to your curiosity and you head over to investigate the unknown object on the ground next to a stump. Ohh, it’s a big clump of mushrooms! 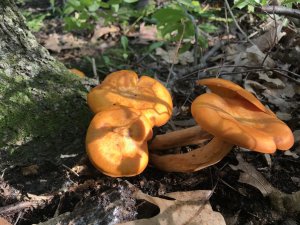 Dumb or beginner’s, you think, you’ll take whatever luck led you to stumble across such a big haul. After all, maybe you’ve heard of orange edible mushrooms like chanterelles and chicken of the woods. Could this be one of those choice edible species?

You don’t know enough to positively identify it, so you know you can’t safely eat it. You still want to figure out what it is, (there goes that curiosity again) so you decide to take notes describing where you found the mushroom, what the mushroom appears to be growing on, and take photos of the cap, gills, and stem. Upon consulting a few mushroom books and websites you discover you found the Jack-o’-Lantern fungus, Omphalotus illudens.

The Jack-o’-Lantern is one of the brightest mushrooms of the Michigan forest, and one of the most appropriately named organisms due to its resemblance to those round gourds that grace our midwestern porches at the end of October. It’s role in the ecosystem is to break down woody debris. Let’s hear it for our decomposers! Jack-o’-Lanterns are found growing summer through fall in dense clusters attached to the dead hardwood they are breaking down, so it is common to find them fruiting on snags, stumps, and downed logs. However, they frequently grow from buried wood, such as roots, so they can seem to be growing right out of the ground.

If this toxic mushroom is consumed, after a few hours people experience severe gastrointestinal distress lasting up to a few days. It won’t kill you, but you might be wishing for death if you experience the full effects of eating this mushroom. On the other side of health, we don’t know too much about mushrooms in general yet, but chemical compounds derived from this mushroom were used to synthesize anti-tumor drugs that made it to clinical trials in humans. 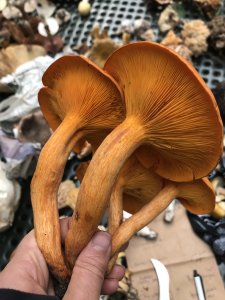 Believe it or not, the Jack-o’-Lantern fungus has something in common with jellyfish, algae, and fireflies. It is bioluminescent and is one of 71 species of fungi that have the ability to exhibit this phenomenon. This spectacle has common names such as foxfire, fairy fire, and cold fire. They don’t glow in the dark like something under a black light might, rather they emit a subtle green glow best captured in time-lapse photography. They don’t do this because they wish they were at the club, but to attract insects to assist with spore dispersal. The glow is said to be more readily observed with younger fresh specimens once your eyes have adjusted to the dark. I haven’t had much luck observing this, and I’ve spent more time than I’ll share here staring at these mushrooms in a coat closet.

I hope this inspires you to follow your curiosity when you’re out on the trails. There is always more to what catches your eye. If you are interested in learning more about mushrooms in Michigan there are some great resources out there. Check out a Mushroom Club program at Lake Erie Metropark led by an interpreter and Certified Mushroom Identification Expert.

The North American Mycological Association is a great all-around resource for fungi: https://namyco.org/