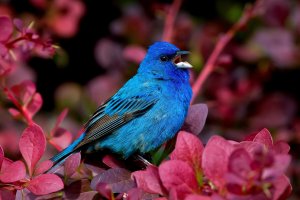 Even on the hottest summer days, male Indigo Buntings can be spotted persistently warbling their sweet, double-noted song from treetops, telephone wires, and other elevated perches. Indigo Buntings learn their songs as youngsters from nearby males, sharing nearly identical songs. But the precise tune varies from place to place, even as close as several hundred yards away. Notes or phrases are often repeated in pairs: “What! What! Where? Where? See it! See it!”

They are sparrow-sized with a short tail and conical bill. Breeding males have shades of bright iridescent blue; but like all other blue birds, Indigo Buntings lack actual blue pigment. Instead, their appearance is due to an optical trick – the light diffracts through its feathers, causing all but the blue light to scatter. In bright light, they can look vivid blue, but in poor light, they appear black. The females and immature males are brownish with faint streaking and sometimes have a touch of blue on the wings, tail, or rump.

Indigo Buntings are common in the Eastern United States, including all of Michigan. They prefer overgrown fields, orchards, roadsides, thickets, and hedgerows; where they feed on small insects, seeds, buds and berries. They spend their winters in southern Florida or northern South America, flying about 1,200 miles each way. Like many other songbirds, indigo buntings migrate at night, using the stars to guide them.