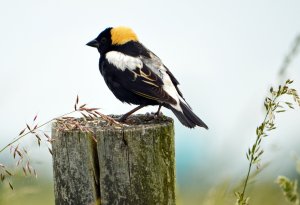 The idea of trekking through a grassland to find a blackbird is one that would rarely excite all but the most avid bird watchers, but this striking bird is far from boring. With his crisp black and white body, golden crown, and jumbled auditory assault of a song, the summer male Bobolink brings life and color to his otherwise seemingly monotonous habitat. The female is at first glance much drabber, resembling a large sparrow with a heftier beak, but also sports a subtler beauty with her pale golden yellow feathers. The strange common name is frequently traced back to a 19th century poem by William Cullen Bryant in which he refers to the bird as “Robert of Lincoln.” The name comes both from the Bobolink’s “reverse-tuxedo” pattern of mostly black with a white back, as well as 19th century English speakers’ insistence that they heard the name within the bird’s song (props to any of you that are able to pick it out.) That mouthful was eventually shortened to “Bob of Lincoln”, and then again to “Bob o’ Linc”, giving us the bird’s modern name. They were also often called “ricebirds” thanks to their propensity to consume and live near the crop, which provided an excellent addition to their typical diet that includes a heavy dose of grass seeds. Today, Bobolinks can still be found near farmland provided it includes unkempt edges for nesting, but their preferred habitat is in the very few pockets of native grassland we still have remaining in Michigan, including at Indian Springs Metropark. This bird undergoes the longest migration of any North American songbird, traveling 12,500 miles round trip to South America every year. Right now, they are returning to Michigan for the summer, so come visit a grassland near you to look for this tuxedo-wearing bird hidden among the swaying stalks.