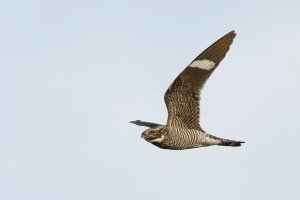 What bird sounds like a 64-bit Nintendo game, flits and dives with the grace of a giant bat, and has a name that would make a superhero jealous?  The not-so-common Common Nighthawk!  This member of the nightjar family has the appearance of a super-sized swallow dipped in speckled brown camouflage, with what looks like a bright white arm band wrapped around the primary feathers of each wing near the tip.  In flight, nighthawks twist, dive, bound and swoop with the flick of a wing, performing aerial acrobatics impressive for a bird their size.  They’re amazing to watch in the low light of dawn or the dusk as they hunt flying insects, and if you catch a male performing a courtship dive, where he quickly stoops, plummets toward the ground, then pulls up at the last instance as his wing feathers create a loud, whooshing “boom,” you won’t soon forget it.  More subtly, their call notes, made up of electric “peents,” reminds one of a Super Mario remix when a group calls together from the darkening sky.  Spotting a single or small group of not-so-common nighthawks tends to be more of a treat than a regular occurrence as their numbers have declined significantly in the past several decades.  Reducing pesticide use and conserving nighthawk nesting habitat can help insure we’ll see these spectacular birds well into the future.