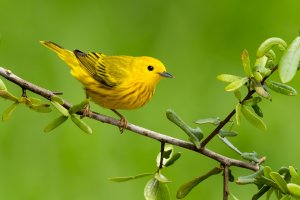 Few other birds are more appropriately named for a singular color than this small but bright warbler, decked out from head to toe in brilliant yellow. Unlike many of its close relatives that only pass through southeast Michigan for a few fleeting weeks during migration, we get to enjoy the beauty of this songbird all summer long. This is one of the most common warblers in North America, breeding across the entire northern half of the continental U.S. as well as most of Canada and Alaska and down into Mexico. They utilize a variety of habitats with dense bushes or other cover for nesting, particularly areas near water such as marshes or wet forested areas. Adult male Yellow Warblers can be identified by their rich yellow shade and by the presence of fine chestnut-colored streaks on their underside, female and immature birds are typically a paler shade of yellow or grayish-yellow without the streaks. They always have a very plain unmarked face with a dark eye and bright yellow edging to the upper tail feathers that set them apart from other warblers. The song of the Yellow Warbler is as alluring as the sight of the bird and can be easily remembered since it almost sounds as if they are repeating the phrase “sweet-sweet-sweet I’m so sweet!” Once you learn the song you’ll quickly become aware of how common this bird is in summer when you begin to notice it in parks, neighborhoods and anywhere else there’s a bit of the right habitat around. Be careful in spring though, several other warbler species like the Chestnut-sided and Magnolia sound extremely similar, but they will all have vacated the lower portion of the state by the end of May. If you don’t have the right habitat nearby, head over to any of your local Metroparks to get a good look at this beautiful bird!