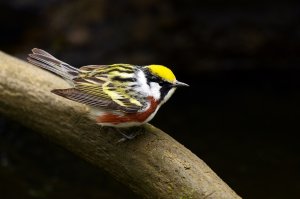 Pleased, pleased, pleased to meetcha! This sweet song belongs to this week’s Bird of the Week, the Chestnut-sided Warbler. This small wood warbler migrates from its wintering grounds on the edges of forests and shade-coffee plantations of Central America to the new growth forests of northeastern US and southeastern Canada. This bird, unlike many others, prefers and thrives in young, re-growing woods, such as areas that have recently been affected by logging, flooding, or fire. Chestnut-sided Warblers are more common today than in the 1800s, when well-known ornithologist and artist, John James Audubon, was traveling the country to document our native bird species. In his lifetime, Audubon saw only 1 of these warblers!

Like most warblers, the Chestnut-sided mainly migrates at night with peak migration occurring during May (north) and September (south). In the US, approximately 1 billion birds die annually by colliding with windows, making it especially important to close blinds and turn off lights in buildings at night to protect avian populations. During breeding season, the adults are gray and white with chestnut-colored patches on their sides, black markings on their face, and a bright gold crown. The male is more richly colored than the female during breeding season, which allows the female to better camouflage in and around the nest. Most of their diet is insects such as caterpillars, moths, beetles, and flies which the bird picks off the underside of leaves or snatches in midair. Look for the Chestnut-sided Warbler and many more migrating warbler species this spring in your Metroparks and across Michigan. Grab a pair of binoculars, a bird field guide, and your favorite hiking shoes – happy birding!

Listen to and watch the Chestnut-sided Warbler in action here: https://www.youtube.com/watch?v=jSs__LAIBwg