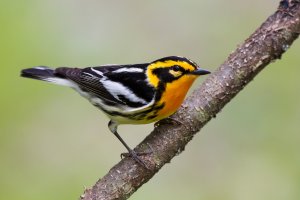 If there was a list of brightly colored Michigan animals that look like they belong in a tropical rainforest, the fiery Blackburnian Warbler would be right near the top. In this case that would be partially accurate, since these birds spend their winters in the warm tropical regions of Central and South America before flying all the way back to the very northern United States and Canada to nest. With their vibrant sunset colored head and neck accentuated by a crisp black and white back, the male is unmistakable in the spring. The female and fall male Blackburnian Warbler are a bit less obvious but sport a duller version of the same color pattern. A triangular darker patch on the side of the face is a good field mark to look for at any time of year.

“Warbler neck” is a seasonal ache known to birdwatchers across the country and is caused by craning to get good looks at this group of small birds that are often found frustratingly high up in trees. The Blackburnian is one of the main culprits; these treetop specialists often spend time up even higher than many of their warbler relatives. Fortunately, they come closer to the ground during migration, which is when most Michigan residents have the best chance to spot one. These winged gems are only around the lower half of the state for a short window of time, passing through in May and then again going the other direction in late August and September. Watch for them picking through fresh leaves and buds for an insect meal or engaging in high-speed aerial chases during territorial disputes in the spring. Your best bet for finding one is to check large stretches of woods, but even a single backyard tree can provide a quick stopover meal for hungry migrating birds, so pay close attention this time of year because you never know who might show up!