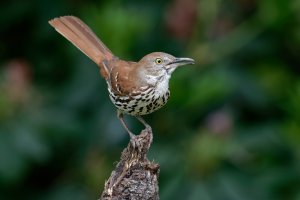 Imagine that you’re walking along the edge of a wooded area in Michigan and you suddenly hear a multitude of different bird songs come from the same bush. You might reasonably assume you’re about to be treated with views of a few birds at once, however, it may also just be this one incredible songster. Brown Thrashers have a vocal repertoire of over 1,100 different song types, including imitations of a variety of other songbirds. Males will choose a selection of these sounds and sing them together in quick succession to attract a mate in the spring. The related Grey Catbird is common in Michigan and also mimics a wide range of sounds, but you can tell that you’re listening to a thrasher thanks to their tendency to sing paired notes, unlike the catbird they will make each unique sound twice before moving on to the next one. Brown Thrashers also have a distinctive call note used separately from their complex songs that sounds like a smacking kiss. Visually, the rich reddish-brown back and pale, speckled belly of the Brown Thrasher easily distinguish it from a catbird but introduce confusion with our similarly patterned thrushes. You can tell the thrasher apart from those thanks to its longer bill and tail and its piercing yellow eye. Bird watchers in the western U.S. might be more familiar with thrashers since they have the privilege of enjoying multiple kinds, but the Brown Thrasher is the only one found east of Texas. They can be found in Michigan during the shoulder seasons and summer, when they come here to nest and feed on a variety of insects and occasional nuts and berries. Look (and for a higher chance of success listen) for this amazing bird hidden deep within bushes and thickets around your yard or at one of your local Metroparks!