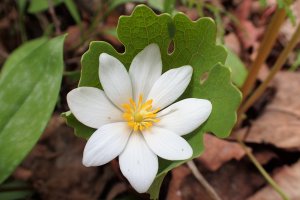 Very early in the spring, native wildflowers begin blooming throughout the woods in the Metroparks. One of the most easily recognizable of these wildflowers is bloodroot, a perennial native to North America, from Florida up into Canada. This flower is found in undisturbed woodlands, on flood plains and on slopes near streams. The reddish sap found in all parts of the plant, is what gives the plant its name. Other names include bloodwort, and red puccoon.  The red-orange sap was formerly used by Indigenous Americans as a dye. Although this plant is toxic, overcollection for use as herbal medicine has reduced wild populations throughout much of its native range, as well as competition with non-native species. When work is done to remove invasive species, bloodroot may recover its numbers, because the seeds of this plant can stay dormant for several years in the soil. For example, a large patch of bloodroot reappeared at Hudson Mills, after work was done along the trails to control non-native plants.