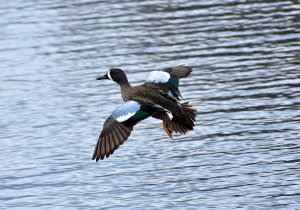 The Blue-winged Teal can be found across most of the United States and Canada during the warmer breeding months in freshwater marshes and shallow ponds. This dabbling duck snacks on aquatic insects, crustaceans, and plant material by flipping its rump high in the air and stretching its neck underwater. The male is unmistakable with a white crescent-shaped mark between the eye and bill, blueish gray head, black bill, wings and rump.  Though females are brown overall and look much like the female Mallard, this Teal has a distinct dark line of feathers through its eye (eyeline), a black beak and pale legs and feet, whereas the Mallard has yellow at the base of the beak and bright orange legs and feet. Like many other waterfowl, the Teal is temporarily unable to fly in late summer when they lose all their primary feathers, the longest wing feathers that aid in flight. Don’t worry, this duck is well adapted to being grounded for a month or so and can quickly hide from predators in tall grasses.

The Blue-winged Teal has a long migration journey to their wintering grounds in South and Central America, so it is one of the first to head south in the fall and one of the last to return in the spring. Look for this adorable duck and other amazing Michigan waterfowl species gliding across the water in and around your Metroparks. Bring your binoculars, as these birds tend to be skittish and their natural behavior is best viewed from a distance. Watch the Blue-Winged Teal in action here: https://www.youtube.com/watch?v=NAeC6FpEba0. Happy Birding!