Winter’s arrival in the Metroparks should herald the start of ice fishing, cross country skiing, snowshoeing, and other snowy and icy adventures. But the impacts of climate change can be observed in our parks whether you are a winter outdoor enthusiast or not. According to Michigan’s Department of Environment, Great Lakes, and Energy (EGLE), the annual temperature of Michigan has increased by 2-3 degrees Fahrenheit since 1900. This seems like a small rise in temperature until we examine the consequences of that increase. 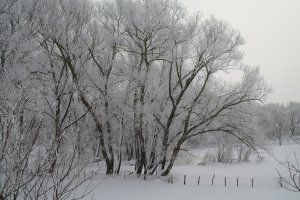 Data collected from almost 240 sites across the United States since 1970 provides a trend of warming that is especially noticeable in the Great Lakes states (read more here). This doesn’t mean that a single winter season won’t have snow, ice, or even extreme cold events, but that the trends in temperatures across decades show that our winter temperatures have increased and the consistent below-freezing days and nights that contribute to lakes freezing solid and snow cover to remain have been reduced. Winter is typically a few weeks to one month ‘shorter’ than it was even fifty years ago.

Warmer temperatures impact precipitation in several ways. Warmer water temperatures and less ice cover can increase evaporation off of the Great Lakes and our inland waterways as well. If you’ve ever experienced lake effect snow, where a breeze blows across open water and then dumps heavy snow, this is the same principal. That warmer, wetter air can only hold so much moisture and as that air mass comes in contact with colder, drier air over the surface of the land, that moisture is going to fall as precipitation. Because of the changes in atmospheric moisture levels due to warmer temperatures and later ice formation, “extreme” precipitation events have become more likely. 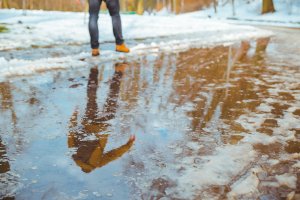 Extreme precipitation events happen whenever the rain or snow that falls in a given time frame is well outside the normal range for a region. According to the Environmental Protection Agency, a larger percentage of precipitation is falling in a single-day event, rather than being spread out through a season (read more here). While the inner child in all of us, and particularly those of us that enjoy many inches of fresh snow to play in, may celebrate a big blizzard-like snowstorm, we may be seeing more of those heavy precipitation days coming down as rain. Even when it does snow heavily, that snow is not likely to linger because of those warmer winter temperatures.

Changes to the snow cover and ice not only prevent us from participating in traditional winter recreational activities in the parks, but there are also real consequences to our wildlife and plants. Animals in Michigan and other four-season climates have many strategies to survive a time of cold. Many may migrate to warmer places where they have access to food and open water, such as many of our summer songbirds. Other animals die, overwinter as an egg or other ‘paused’ phase of their life cycle; such as most of our insects, arachnids, and crustaceans. There are the hibernators (and animals with similar types of metabolic slowdown)- think of bears in northern Michigan to our groundhogs and reptiles and amphibians here in the Southeastern part of the state. And then there are other animals that remain active here in the winter months and depend on the snow and ice for their survival. 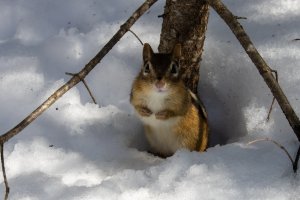 Fluctuating temperatures and lack of snowpack can really change the ability of wildlife to survive. While we think of snow as “cold”, it can provide a thick layer of both insulation and cover for small, active animals like chipmunks and mice. The snow protects them from predators, of course, but also from extreme temperatures and wind. Without this cover, they are at great risk of being eaten but also more susceptible to extreme cold, moisture, and anything else winter might throw at them.

Plant blooming and leaf-out are often triggered by warming soil and air temperatures. A span of warm days in February, which is not unusual in recent winters, can cause early bud-burst. These buds, once tightly closed and dry to survive the freezing temperatures of winter, cannot sustain leaves or flowers after opening. These freeze and fall off, meaning that when spring actually arrives, the plant needs to put additional energy into new leaves or flowers. This doesn’t just impact the health and survival of the plants. Remember those songbirds that migrated south for winter food? Their spring journey northward is triggered by day length, and their arrival in the Upper Midwest is timed to take advantage of the massive food sources available with budburst, blooming, and insect hatches. If these happen in February or March, instead of April or May, there is a critical mismatch in the birds’ need for food and the availability of those food resources.  Food shortages can then change spring and summer nest success, as birds spend time and energy searching for food to recover from migration instead of nesting.

Winter in our Metroparks can be a wonderful season to get outside and explore. As you head out this season, notice how the weather has been influenced by our changing climate.

Impact of climate change on wildlife