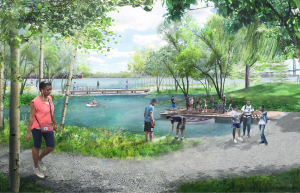 The Huron-Clinton Metroparks Water Garden will be the first-ever Metroparks location within the City of Detroit and will feature numerous opportunities for visitors to experience the water through winding walking paths, tranquil seating areas, educational signage and open-air classrooms where engaging programming with students and visitors will take place. This announcement comes the week Metroparks also announces a new strategic plan that outlines a three-year vision of planning and progress for the organization under three main goal posts of “listen and connect,” “maintain and invest” and “conserve and steward.” One of the objectives outlined in the plan is to increase access to Metroparks services for Wayne County and the city of Detroit with a physical presence and customized programming.

The Detroit Riverfront Conservancy and Huron-Clinton Metroparks first began working together in 2015 with programs at special events along the riverfront that educated thousands of Detroiters on wildlife and the outdoors. They entered into a multi-year, pilot partnership in 2020 that focuses on widening access to new programs and recreation for city and suburban families, and leverages the world-class parks, greenways and public spaces managed by the two organizations.  Since the November 2020 announcement, the two organizations have partnered on developing robust programming and joint outreach efforts.  One of the most successful efforts was the Swim in the D program, in which the Conservancy and Metroparks joined with the City of Detroit to help 500 young Detroiters learn to swim.

“The naming of the Water Garden is incredibly exciting for us,” said Amy McMillan Director of Huron-Clinton Metroparks.  “The Metroparks form a greenbelt of vibrant active and natural spaces around the metro Detroit region, but for decades there has been a gap in Metroparks presence within the city of Detroit. We are finally making progress towards closing that gap and establishing a physical presence that residents can engage with daily. We know we still have a lot of work to do, but we are grateful for this strong partnership that is helping us realize progress towards that goal.”

Ralph C. Wilson, Jr. Centennial Park is one of the most significant projects on the horizon for the Conservancy and a major step forward in completing its goal of developing 5.5 miles of revitalized riverfront. It will dramatically change the landscape along the downtown riverfront, and it is expected to significantly boost economic benefit in the area as well. 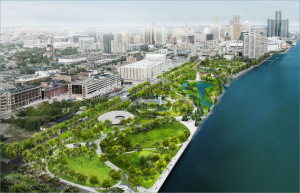 Other major attractions of Ralph Wilson Park include the William Davidson Sport House, which features two regulation basketball courts, the Delta Dental Play Garden which features an array of animal structures for kids to climb in and around and the DTE Foundation Lawn that will be used for special events and programming.

Metroparks attracts approximately 7 million visitors to its 13 parks comprising 25,000 acres annually and a recent study by the Trust for Public Land found the Metroparks generate more than $90 million in direct visitor spending as well as millions more in other economic, environmental and health benefits each year across the five counties and hundreds of communities it serves.