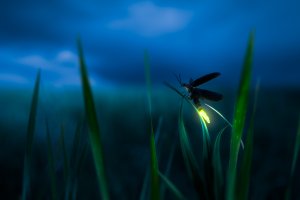 It’s the time of year for Mother Nature’s light show: Fireflies! Often called lightning bugs, fireflies are a group of beetles in the Family Lampyridae, that use bioluminescence during twilight to attract mates or prey. Bioluminescence is a “cold light,” meaning it doesn’t create any heat. The light of a firefly, glows from its lower abdomen, usually looking greenish yellow. An adult firefly lives only long enough to mate and lay eggs, so they may not need to eat during their adult life stage. The larvae, sometimes called “doodlebugs,” usually live for approximately one to two years, before becoming adults. Fireflies are found all over the world. They live near ponds, lakes, streams and marshes, but they don’t need a lot of water to get by. Vernal pools and small depressions that hold water during firefly mating season can all provide the habitat fireflies need. Most firefly species live at the margins where forest or where fields meet water. They also like humid, warm environments and grassy areas. Fireflies are disappearing because of two main reasons, development of natural areas and light pollution. Light pollution is believed to interrupt firefly flash patterns. Scientists have observed that synchronous fireflies get out of synch for a few minutes after a car’s headlights pass. Light from homes, cars, stores, and streetlights may all make it difficult for fireflies to signal each other during mating, meaning fewer firefly larvae hatch next season. Where fireflies once had uninterrupted forests and fields to live and mate, homes with landscaped lawns and lots of exterior lights are taking over. The reduction of habitat and the increase in lighting at night may all be contributing to make fireflies rarer.