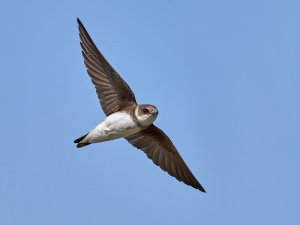 The smallest of the North American swallows, the silhouette of a bank swallow shares the large head, small bill, pointed wings, and forked tail with others in its family (though the wing point and tail fork are less pronounced than in other species). Their underside is white, with a brown back and band across the chest. The underwings are darker than the rest of the body. They are incredible aerial predators, flying as high as 50 feet above the ground to catch flying insects, only rarely catching grounded insects or those resting on the surface of the water. They are usually found in relatively open areas, especially near bodies of water, and avoid thick forests or undergrowth. Males construct nests by digging tunnels into loose soil embankments near large bodies of water. Like many aerial insectivores (birds that catch and eat flying insects), their population has decreased drastically over the past few decades. Keep your eyes and ears out for this quick-moving bird the next time you visit your Metroparks!