Do you remember wading in a creek and trying to catch crayfish? Or maybe where you grew up they were called mudbugs, crawdads, or crawfish. The variety of names suggests how wide-spread these clawed crustaceans are; Michigan’s waterways are home to ten different species.

Unfortunately, while eight of these species are native, such as the big water crayfish and the calico crayfish, there also two invasive crayfish that now call Michigan “home”. The rusty crayfish is one such invasive species that hails from the Ohio River Basin, and has moved its way up towards our lovely mitten state. It currently occupies almost sixty percent of the watersheds in Michigan, which makes it one of the most abundant crayfish in the entire state. 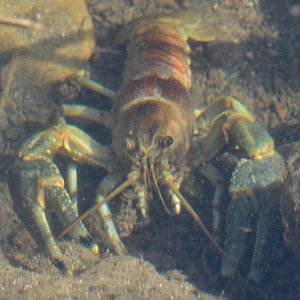 The rusty crayfish started spreading through fishing in the Great Lakes. A very popular form of fishing for larger prey is live bait fishing, which uses live animals, such as crayfish or small fish, to catch the bigger predators that would usually eat them. In the 1960s, fisherman would bring over the rusty crayfish to use as bait for their next fearsome fish to put on the mantle, but the slippery little scoundrels would escape off hooks or out of tackle boxes. After escaping, they started establishing colonies throughout all the fresh water in Michigan.

What does the presence of rusty crayfish mean for the underwater ecosystems of Michigan? Well, for starters, more crayfish in the waters means that the native crayfish must compete with rusty crayfish so they can get the food and shelter they need to survive. And when it comes down to crayfish combat, the rusty crayfish’s colossal chela conquers the local losers. Rusty crayfish have spread throughout Michigan, and are now found in nearly every county. They push out the native species, such as virile and northern clearwater, that prefer the same rocky habitat with their larger claws and aggressive demeanor.

Unfortunately, this crustacean doesn’t stop at other crayfish. Crayfish eat all manner of different things from plants to snails to other crayfish. This varied diet makes our native species an important part of our waterways. But one of the most concerning things in the diet of the rusty crayfish is their ability to consume large quantities of fish eggs. By sneaking into fish nests and munching on their eggs, the rusty crayfish can impact native fisheries.

While it’s easy to realize what a threat rusty crayfish are to Michigan, stopping the spread is a big challenge. These crayfish are used not only as live bait, spread from waterway to waterway as escapees or dumped after a day of fishing but they are also used in biological supply companies, where they find their way into classrooms all over the country. Well-intended people release them without realizing the harm they can cause to other species.

To further prevent the spread of these and other non-native species, anglers can use native fish and crayfish and not dump their bait after fishing. Educators that rely on live organisms such as crayfish for their classrooms need to know not to release them, but find indoor aquarium homes for them when their lessons are over. Rusty crayfish are difficult to eradicate once they are in a body of water so prevention is critical to slow their spread.