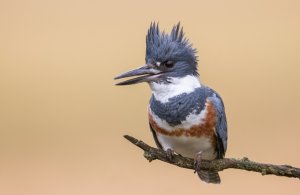 If you have ever noticed a bird flying quickly up and down rivers and shorelines, while giving a loud, rattling call, you might have spotted a Belted Kingfisher. They also spend much of their time perched on branches or lines that overhang the water, watching for small fish and other aquatic prey, which make up most of their diet. Once a fish is spotted, they will plunge headfirst into the water, grabbing the prey in its heavy, straight bill.

These shaggy-crested birds are blue-gray; males have one blue band across the white breast, while females have a blue and a chestnut band on their bellies. The Belted Kingfisher is one of the few bird species in which the female is more brightly colored than the male. Scientists don’t really know why – one hypothesis is that it allows the males to identify the females. The males will often stay at their territory year-round, as they are highly territorial. When the males see the bright, rusty belt of the females, it signals them to welcome the visitor, instead of to chase her away. The other idea is that female kingfishers may have higher-than-normal testosterone levels. Females tend to be more aggressive and territorial than males during the breeding season. High testosterone levels may also affect the way pigments are incorporated into a bird’s plumage.

Their breeding habitat is near bodies of water and coasts across most of the United states and Canada. They migrate from the northernmost parts of their range into the southern United States, Mexico, Central America and the West Indies in the winter. If there are remaining open bodies of water, they may stay in the north during the winter.

If you’d like to learn more about the Belted Kingfisher, visit https://www.allaboutbirds.org/guide/Belted_Kingfisher/id