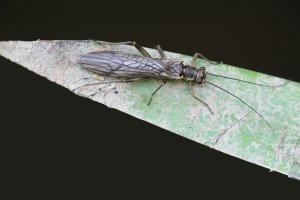 The winter season is filled with crunching snow, twinkling lights, beautiful landscapes, and even an insect or two. While many of our resident insect species have disappeared for the season, there are a few who make a special appearance including the Stonefly. Stoneflies spend their larval or nymph stage occupying the rocky bottoms of flowing streams, rivers, and springs. During this stage the nymph will continue to grow, molt, and eat a diverse diet of plant debris, algae, and even other insects. Stoneflies will remain in this stage for up to four years, culminating with the nymph crawling from the water, latching onto a large stone, hence the name, and proceeding to molt for a final time into their adult life form. This final stage into adulthood commonly occurs during the summer months but with certain species, will take place during the winter season.

Why would certain Stoneflies emerge during such harsh conditions and how are they able to survive? Many insects that exist in cooler regions will have strategies to avoid or tolerate the freezing temperatures. They do so through specialized bodily fluids and processes that allow them to continue functioning even as they reach below freezing temperatures. Winter stoneflies have adapted these strategies along with using snow as an insulator against the more unforgiving weather. It is believed certain stoneflies species will emerge in the winter due to a lack of predation. Even lacking predators, adult stoneflies must move quickly once on land. To attract a mate, male stoneflies will rhythmically tap the tips of their abdomen, known as “drumming,” along a variety of substrates to charm a female. Adults only have a few short days in which they must find a mate, breed, and deposit their eggs into a nearby stream or river.

Stoneflies are not only one of the few insect emergences we have during the winter season, but they are also an indicator for water quality. We can determine the health of a body of water not only through chemical testing but also through biological indicators such as the presence of certain species; one such species is the stonefly. Stoneflies during their larval stage are classified as a pollution intolerant, benthic macroinvertebrates. What does this all mean? Pollution intolerant species are not capable of surviving in an environment heavily contaminated with pollutants. Benthic macroinvertebrate simply means bottom-dwelling invertebrate that is visible to the naked eye. The mere existence of stoneflies in each river or stream can tell us a lot about the health of that water system. An increase or decrease in those levels can give us trends for the quality of that water as well.

Not only do stoneflies have a unique life cycle, indicate the health of our waterways, they also provide numerous benefits in an ecosystem as well. They act as a cleanup crew by consuming decaying plant matter accumulating at the bottom of rivers and streams. Stoneflies are an important food source for many fish species and one of the few prey insect species available year-round.

There are over 3,000 species of stoneflies occurring world-wide and are distributed throughout each continent except Antarctica. They provide numerous benefits to humans, wildlife, and the environment. Next time you take a walk along a snow-covered river or stream, be sure to seek out this incredible insect and say, “thank you”!