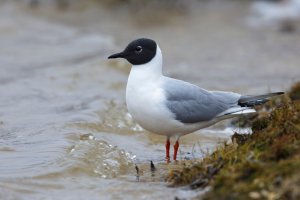 Breeding in the boreal forest of Canada and northern Alaska, the Bonaparte’s Gull is a migrant and winter visitor to Michigan. You can often find them foraging for food over open water above lakes and rivers, most commonly spotted on the open waters of the Great Lakes. During this time of year they will be sporting their non-breeding colors. Look for a mostly white gull with a grayish upper wing and a distinct gray spot on their cheek. As one of the smallest gulls in North America the Bonaparte’s Gull is quite agile. They use this ability to maneuver quickly over water to catch small fish and insects. While migrating they are often spotted inland over farm fields scooping up worms and insects on the wing.  This agility also helps them to catch prey as they migrate in tight flocks. One of the most interesting feeding behaviors they exhibit is referred to as “conveyer belt” foraging. They fly as a flock, grazing the water’s surface, quickly diving down to catch fish. Then just as they approach the end of the group of fish they fly upward allowing the wind to catch them, bring them back to the start of the group of fish where they repeat the same foraging process again. During winter they move great distances in search of areas with plentiful foraging opportunities so keep your eyes on open water this time of year to spot this small gull. If you are interested in finding out more about birds you might spot this winter, Kensington Metropark Nature Center is hosting Chickadee Chowdown programs throughout the holidays. Happy Birding!