As evening approaches, I find myself resting in the shade of a Basswood tree near a small stream cutting through a nature preserve.  Damselflies battle amongst themselves for territory nearby, and rest on the leaves of the shrubs lining the stream.  One, a bright green male, flashes in my view and I turn to watch him land on the pinnate leaflets of a tall shrub.   Further investigation reveals the identity, the American Elderberry (Sambucus canadensis). 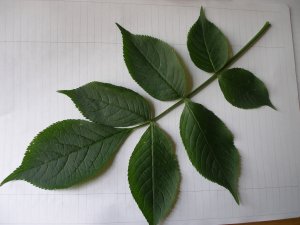 My elders live at the edges of wetlands and flowing bodies of water.  Often content to thrive in place when their needs are met, this shrub sends up suckers, or vegetative clones, from their root structures underground that help them to hold space in an ecosystem.  In the Summer, when the air is warm and thick like honey, their large white clusters of flowers are an important source of food for pollinators Clusters of small, white flowers offer numerous insect species tasty pollen grains in exchange for their service as pollinators, moving pollen to new plants and ensuring a future generation of Elderberry seedlings.  Species found visiting these plants to feed on pollen include: honeybees, little carpenter bees (Ceratina spp.), Halictid bees, Syrphid flies, bee flies (Bombyliidae), Muscid flies, long-horned beetles (Cerambycidae), tumbling flower beetles (Mordellidae), and other miscellaneous insects. 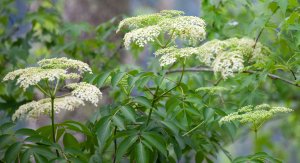 Later, as the heat fades and the first leaves begin to change, their berries are a bounty ready to be plucked by the birds.  While the leaves of this plant are toxic to mammals, several insects rely on this plant for a food source, including the Cecropia Moth.  At least 30 species of birds have been observed foraging on their small, black berries, as well as Fox Squirrels, Red Squirrels, White-footed Mice, Eastern Box Turtles. From their branches that spread out and provide shelter, to the food they produce in their leaves, flowers, and berries, these American Elderberries are a vital member of the communities and ecosystems they are a part of. 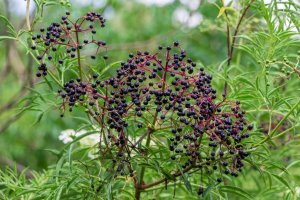 Elderberries have a long history of use by humans around the globe, especially by Indigenous peoples of North America.  They use all parts of the plant.   Stems were hollowed out to create blow guns, maple sugar spiles, and musical instruments. In fact, the genus Sambucus originated from the Greek word sambuce which referred to a flute-like instrument made from hollow stems.  Stems and berries would also be used as a natural dye.  Ripe berries are cooked down and consumed in a variety of preparations ranging from jellies and sauces all the way to alcoholic beverages.

Additionally, many Indigenous communities in North America were quite familiar with utilizing Elder to treat their sick.  Flowers were harvested and made into teas, steaming baths, and poultices.  Berries are prized for their high levels of Vitamin C and antioxidants.  Leaves, stems, and roots were harvested and combined with Chamomile to reduce swelling related to bee stings and stiff joints.

Whether you plan to make a tea out of the flowers, a syrup out of the berries, or you’re planting Elderberry on your property to provide food for wildlife, this plant is one that has rooted itself in North American culture and folklore for thousands of years.  As the seasons progress, I hope you find ways to appreciate this valuable member of your community.