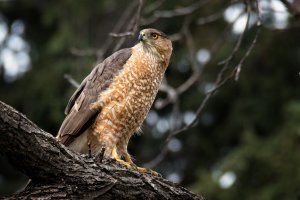 Take a close look at this pictured bird and try to identify it. If you are struggling, don’t worry, you are not alone! That is because this picture is of the Cooper’s Hawk who is known for looking remarkably similar to another Michigan resident hawk, the Sharp-shinned Hawk. Even practiced birders can find these identifications difficult. Some easy tips are that Sharp-shinned Hawks are generally smaller that the Cooper’s and the Cooper’s have a larger, flatter head. Both birds live in wooded areas and are most often visible at the forest’s edge. Cooper’s Hawks are usually more common.

The Cooper’s Hawk distinguish themselves clearly if you should ever see one on the hunt. These hawks are one of few birds that hunt other birds mid-flight. Even rarer is that the Cooper’s Hawk then kills its prey, not by tearing with its talons or ripping with its beak, but instead by squeezing. They have even been known to stand on top of their food or hold them underwater until the prey stops moving!

Like most hawks, the female Cooper’s Hawk is significantly larger than the male. This makes mating rituals a little complicated for the males, considering the females are built to hunt smaller, mid-sized birds. For their safety, males wait for females to begin singing out a song signifying that she wants to be approached. From there, males will build the nest on their own for their new mate and bring her and the young food for up to 90 days or until the young fledge.

Be on the lookout for this bird in many of your Metroparks, anywhere there are forests, the Cooper’s Hawk may live. If you want to tell your friends about this amazing bird in the future, know that in upcoming years, the common name of the Cooper’s Hawk will be changed by the American Ornithological Society’s review of birds with honorific, eponymous, or otherwise harmful common names.

You can get updates about the AOS’s review of English bird names at https://americanornithology.org/english-bird-names/ and learn why this matters at https://www.audubon.org/magazine/summer-2022/whats-bird-name.