When Robert Wells penned ‘Chestnuts roasting on an open fire’, he was likely referencing the American Chestnuts he’d savored as a child in Boston.  By the time Nat King Cole picked up the song in 1946, the American Chestnut had already suffered heavy losses across its range in the forests of eastern North America and was mostly absent from the table. The introduction of the fungal pathogen known as Chestnut Blight (Cryphonectria parasitica), first detected in 1904, had wiped out an estimated 4 billion trees in the first half of the 20th century. 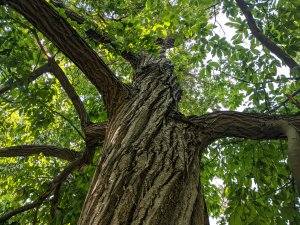 American Chestnuts held space and a unique ecological niche in the forest.  Reports estimate that one in every four trees in the Eastern forest were American Chestnut trees.  Mature trees towered 100 ft over the forest floor and dropped an annual bounty of nuts that wildlife depended on.  The functional extinction of this species across its range sent ripples: five species of moths went extinct as a result, squirrel populations crashed, and many other wildlife populations suffered losses.  As chestnuts died, the vacancy they left in the ecosystem was replaced by other, less reliable food sources like oaks and hickories.

It wasn’t just the ecosystem that suffered, either.  As American Chestnuts fell from their place in the canopy, many people lost access to a food and lumber source that had been a part of the American landscape for thousands of years.  Long before Europeans arrived on the continent, native Americans utilized chestnut trees for food and medicine.  Immigrants and settlers alike found the tree a source of bounty; chestnuts were harvested from the forest floor by the shovelful.  Woodworkers prized these “Redwoods of the East” for the lumber that could be extracted from them.  The grain was naturally straight, resistant to rot, and lightweight.  Chestnut lumber found itself being used for everything from telephone poles to musical instruments.

Since the 1930s, conservationists have worked towards the goal of returning the American Chestnut to its place in our forests.  Breeding programs were developed in the mid 1900’s that use extensive back-crossing with naturally resistant Chinese Chestnut trees to create Chestnut trees that are considered 15/16 American, but with high resistance to the fungal pathogen that causes Chestnut Blight.  As technology progresses, though, so do our strategies for conservation.  By inserting genes from other resistant plants into American Chestnuts, researchers at the State University of New York College of Environmental Science and Forestry (S.U.N.Y.–ESF) have created hundreds of genetically engineered American Chestnut trees with a resistance to the blight.  Once approved, these trees can be reintroduced to the Eastern forests. 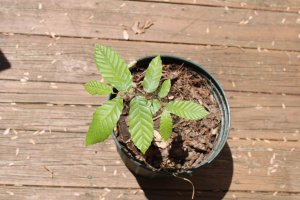 In our home state of Michigan, chestnut trees have had a unique fate. Studies by Michigan State University’s plant pathologist Dr. Dennis Fulbright in the 1980s found a novel virus attacking the Chestnut Blight that allowed many trees to survive.  His study and description of this phenomenon resulted in samples of the virus being applied to other American Chestnuts in the region that allowed many to be saved.  Today, American Chestnuts in Michigan stand a chance of survival because of this naturally occurring biocontrol.

When a Chestnut tree falls in the forest, the stump often remains.  Because the fungal pathogens that kill the mature trees are unable to compete with soil microbes, the root structures can still survive and send up green saplings above the ground.  Sometimes, they might even survive long enough to grow to some height before eventually falling to the blight again.  With the help of human intervention, it is the hope of many that one day the American Chestnut can rise again.